A Clear View From the Mountain-Top...

Isaac Newton's
Letter to Boyle, on the
Cosmic Ether of Space

Sign Up for Email Updates
Keep in touch with Dr. DeMeo and OBRL, with new information, publications and events

Isaac Newton's
Letter to Robert Boyle, on the
Cosmic Ether of Space - 1679

Below is a letter on the question of the cosmic ether of space, written by Isaac Newton in 1679 to Robert Boyle, a fellow scientist about 15 years older than Newton at the time, and who is remembered with a fame nearly equal to that of Newton. This letter firstly came to my attention where it was reprinted in a relatively-unknown journal edited by the heretic-scientist Wilhelm Reich, his International Journal of Sex-Economy and Orgone Research (vol.3, 1944, p.191-194). The original reference from Reich's journal is found in the 1938 volume Isaac Newton: 1642-1727, by J.W.N. Sullivan (Macmillan, NY p.118-124). However, a longer and more complete version of the letter was thereafter found in an 1846 publication (cited at the bottom of this webpage) which contains pertinent information not previously available.

The letter below is significant firstly because it is not well-known outside of a few historians. Where it is quoted, significant parts as I have now restored, are often left out.

The letter is significant secondly because of its contents. Newton's early embrace of a tangible and motile ether was heresy not just to the Vatican in his time, but also for the modern departments of physics in nearly every university, where quasi-religious concepts of empty-space, devoid of any tangible qualities are embraced; and nothing can be permitted to challenge them.

The letter clearly shows the young Newton, who wrote this in 1679 when he was 37 years old, had a firm belief and working grasp of the ether of space as a thing of substance and "ponderability", something which participated in the movement and ordering of the planets and universe, as a working force in optics, chemistry and gravitation. In this, Newton was continuing the conceptual ideas of Galileo, which had been such an irritant to the Vatican Bishops, who would tolerate no possibility of a motional force in nature other than God. The idea that ether and god might be identical descriptions for the "prime-mover" was equally intolerable, as while one could scientifically know and measure the ether, one could not by definition measure or know "the divine". The young Newton was not bothered by such conceptual difficulties as which bothered the Bishops of Rome, however, but the older Newton increasingly became preoccupied with theological matters, to the point that nearly all his biographers would agree he had become as much of a theologian as scientist in his last decades. Even only 20 years after penning this Letter to Boyle, he writes in the last query of his Optics, the following:

During those later periods, Newton would drop ideas such as a ponderable and moving cosmic ether in favor of more abstract concepts, such as the divine "prime mover" or deified "absolute space", which was foundational for most later astrophysical investigations into the nature of the cosmos. The most obvious result of this shift was, that in the original Michelson-Morley experiment for testing of ether-drift, everyone anticipated a very large ether-drift effect, based upon the assumption the Earth was racing through an intangible and substance-less static and immobile cosmic ether at very high speeds. No such intangible static ether has ever been demonstrated, nor could it be. But a material and substantive entrained ether, moving more slowly at lower altitudes and close to the speed of the earth itself, something quite similar to that proposed by the young Isaac Newton, was detected repeatedly, as I have already summarized in two papers on the subject:

I also have prepared a separate webpage which offers PDF downloads of most of the historic ether-drift research papers which got a positive result, by scientist-authors such as Michelson, Morley, Miller and Sagnac, plus more recent positive replications as by Galaev:
http://www.orgonelab.org/energyinspace.htm

Thirdly, this letter from Newton is significant for its insights into how the ether "adheres" to matter, and may work to bind matter together, to create optical, chemical and gravitational effects. He would later abandon all such ideas, and the world would basically forget about them until the first half of the 20th Century, when scientists such as Dayton Miller, Wilhelm Reich, Giorgio Piccardi and others would detect exactly that kind and form of a cosmic energy force in nature, expressing itself in their experimental results.

Newer studies undertaken today, attempting to better understand the nature of the substance and structure of space, can benefit from this older work. There is a prejudice we must overcome in the sciences, to not drink from these old refreshing wells, in spite of their clear and deep waters, as if the plastic-bottled fizz-water of modern vending-machine scientism will make us wiser or healthier. It is not so.

The young Newton was on the right track and had it right, and would have made the same basic mathematical and experimental proofs in optics and gravitation had he sayed with those original thoughts about the ether. Nothing would be different, except for a greater appreciation for the substance of space. The older Newton lost that track, descending into theological labyrinths, even while a few heretic scientists of later centuries found the "red-thread", and continued on.

PS: As a final point, one can reflect upon the difference between the "two Newtons" as revealed in their portraits. The younger Newton as painted by Godfrey Kellner in 1689 on the left side above, even while it is ten years after his "letter to Boyle", shows a man who still carries a vitality and spark of life. The elder Newton in the right side portrait, painted by Sir James Thornhill in 1712, reveals Newton the theologian, preoccupied with the hereafter.


Note on Symbols: The symbols in Newton's letter appear to mean as follows:

= Ag Argentum or Silver, symbolized by the color of the moon.

= Au Aurum or Gold, symbolized by the color of the Sun.

As reproduced from the following book: 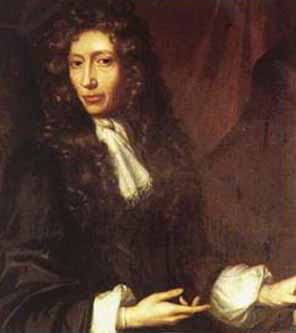 If you enjoyed and benefited from these materials, please consider to
purchase our publications on similar topics, or to
make a donation to the OBRL research fund.
Thank you!

Donations are IRS Tax-Deductible.
Thank you!

This page, and all contents, Copyright (C)
by James DeMeo and the Orgone Biophysical Research Laboratory, Inc.